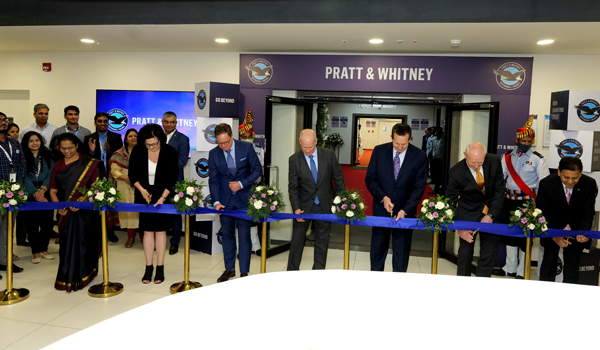 The opening of IEC
Pratt & Whitney, a Raytheon Technologies business, has officially opened the doors to its new India Engineering Centre (IEC) in Bengaluru.
The facility is co-located with Pratt & Whitney's India Capabilities Centre (ICC), which opened in 2022 to provide integrated global supply chain support, and the recently inaugurated Collins Aerospace engineering and global operations centres.
The IEC, which was designed to meet the LEED Platinum certification, further enhances Raytheon Technologies' combined presence in India of over 5,000 employees and facilitates collaboration across the company's businesses.
Growing rapidly
"The Indian aviation market is growing at a rapid pace and Bengaluru is a hub for that growth," said Geoff Hunt, senior vice president, Engineering, Pratt & Whitney. "The work conducted at the IEC – by some of India's best and brightest minds – will support cutting edge technology that will drive the future of flight."
More than 50 employees are now based in the state-of-the-art facility, with an additional 450 jobs to be filled over the next four years. Work performed at the IEC will encompass elements such as aero and mechanical and control systems for various products in Pratt & Whitney's broad portfolio of large and small commercial engines. It will also extend across the entire product lifecycle from development to field support and sustainment.
"The IEC will fully integrate with our existing global engineering footprint across Canada, Puerto Rico and Poland to advance world-class technology such as the geared turbofan and other sustainable propulsion solutions," said Paul Weedon, vice president, Engine Development, Pratt & Whitney Canada Corp.  "The IEC team will be key to improving commercial engine performance, extending time on wing, reducing airline operating costs, and decreasing fuel consumption."
The opening of the IEC further illustrates Raytheon Technologies' long history of investing in India.
Largest footprint
With more than 1,500 engines and auxiliary power units in service, Pratt & Whitney has one of the largest footprints for any engine maker in India. Pratt & Whitney's GTF engines power more than 180 A320neos and A321neos and have delivered more than $1 billion in savings to Indian airlines since entry-into-service. Other significant investments in-country include Pratt & Whitney's state-of-the-art India Customer Training Centre in Hyderabad and its R&D collaboration with the Indian Institute of Science, Bengaluru.
India is important to the global growth and investment strategy of Raytheon Technologies, and the advanced infrastructure and talent pool will help drive the country's contributions as a global leader in aerospace and defence.-- TradeArabia News Service
Share