Adnoc to build ammonia plants in alliance with thyssenkrupp 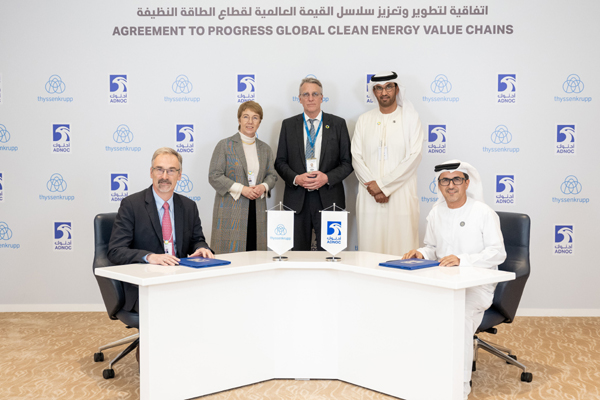 Abu Dhabi National Oil Company (Adnoc) has signed a MoU with thyssenkrupp Uhde, a Germany-based subsidiary of thyssenkrupp Group that specialises in chemical engineering, to explore a long-term partnership to create new markets for hydrogen and promote global clean energy value chains.
Signed at Abu Dhabi Sustainability Week (ADSW) today (January 17), the agreement will focus on the development of projects for large-scale ammonia cracking, which is used to extract hydrogen from ammonia after transportation.
Ammonia is a carrier of hydrogen, and it is much easier to compress and transport. When shipped, after arriving at its destination, the ammonia needs to be decomposed, or “cracked,” into hydrogen, before use in the energy value chain.
Adnoc, a responsible provider of reliable, lower-carbon intensity energy, said as per the agreement, the duo will work together to develop large-scale ammonia cracking plants with thyssenkrupp technology.
The agreement will also lead to the exploration of opportunities in the clean energy value chain for the supply and shipment of low-carbon or green ammonia from the UAE to large-scale ammonia cracking facilities globally, it stated.
Musabbeh Al Kaabi, Executive Director, Low Carbon Solutions and International Growth Directorate, said: "Adnoc’s fast-growing hydrogen business is enabled by the UAE’s abundant and competitive energy reserves. We are committed to strengthening our position as a reliable supplier of lower carbon-intensive energy, creating new revenue streams and growing the global market for hydrogen. In doing so, we will work with like-minded partners, such as thyssenkrupp to deliver tangible solutions that contribute to the decarbonisation of the energy sector."
The ammonia cracking process is based on globally proven Uhde reformer technology, which is applied in over 130 large-scale chemical plants across the world.
Cord Landsmann, thyssenkrupp Uhde CEO, said many countries in Europe, along with several others across the globe, are looking to clean hydrogen imports to decarbonise industry and society.
"Clean ammonia is the best way to transport hydrogen by ship, and together with Adnoc, we will deliver the last piece of the puzzle for global clean hydrogen trade at large scale," he stated.
Adnoc pointed out that it had already invested in low-carbon ammonia, where the carbon dioxide (CO2) emitted during production is captured and stored underground.
In May 2021, the company announced a 1 million tonnes per year low-carbon ammonia production facility at the TA'ZIZ industrial ecosystem and chemicals hub. The company has significantly expanded its strategic energy partnerships across the hydrogen value chain and shipped demonstration cargoes of low-carbon ammonia to customers in Germany and Asia to test its application, it stated.
Adnoc is also investing in green hydrogen – and renewable energy – through Abu Dhabi Future Energy Company (Masdar), a clean-energy powerhouse that will place the UAE at the forefront of the energy transition, said the statement.
Through this investment, Adnoc aims to become a world leader in green hydrogen, it added.-TradeArabia News Service
Share