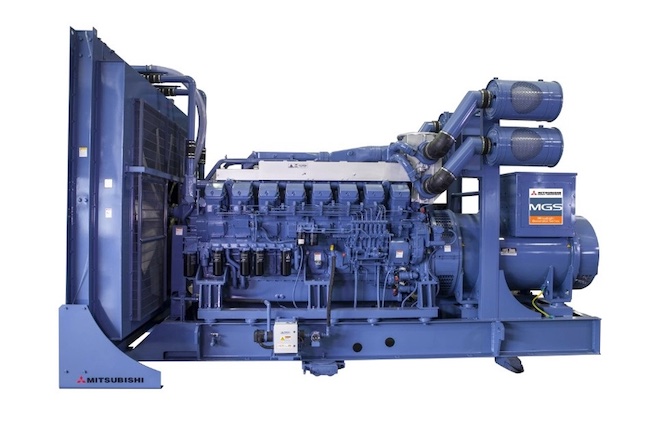 Mitsubishi Heavy Industries Engine and Turbocharger (MHIET), a part of the Mitsubishi Heavy Industries Group, has introduced its new MGS-R Series of diesel generator sets mainly developed to support the growing needs of the digital economy, primarily targeting data centers across Asian and Middle Eastern markets.
The new series also serves as a reliable backup power solution for commercial facilities such as shopping malls and office buildings.
Mitsubishi Generator model MGS-R is the first upgrade to MHIET's diesel generator set lineup in over two decades following the MGS-B models introduced in 2000.
The new series features 21 models that cover all rating categories. Some of them were released last November, while the remaining models will be introduced in sequence by year-end.
The new series provides outputs ranging from 500 to 2,750 kVA for 50Hz, and 460 to 2,000 kVA for 60Hz for standby offerings. With the recent modifications to turbocharger specifications and improvement on fuel system and exhaust system to the engine, all models in the series boasts 10-second start.
Newly adopting MHIET-made compact and high-power 12-cylinder engine on the 1,500kVA rating for 50Hz, the best-seller in the offerings, has made its installation area the smallest-in-class.
Furthermore, overhaul interval has been extended to more than double by examining how generator sets are operated at sites.
All models in the MGS-R series are compliant with the two leading industry standards: the ISO's Class G3, the organization's highest standard for generator sets; and the standards of National Fire Protection Association of the United States.
They also satisfy Tier 3 and Tier 4 standards by the Uptime Institute, a private sector organization that certifies the reliability and overall performance of data centers. These days more and more data center operators require high levels of quality compliance with various industry standards.
"At a time when reliable power is increasingly critical for commercial facilities such as data centers, we are pleased to announce that we have launched this new MGS-R Series," said Ichiro Ichihashi, the Senior General Manager, Engine & Energy Division of MHIET.
"Many generator sets manufacturers purchase engines from suppliers, but we manufacture engines ourselves as well as generator sets. I believe this is our strength and our value. I am confident of the reliability and dependability of our generator sets that have sold 12,000 units worldwide," he stated.
The MGS Series will be assembled at Mitsubishi Heavy Industries Engine System Asia plant in Singapore. MHIET will continue expanding our MGS Series to meet the growing energy needs of customers in various industries including mission-critical applications.
Share