Alba starts commissioning of FCN Project at Potlines 4 and 5 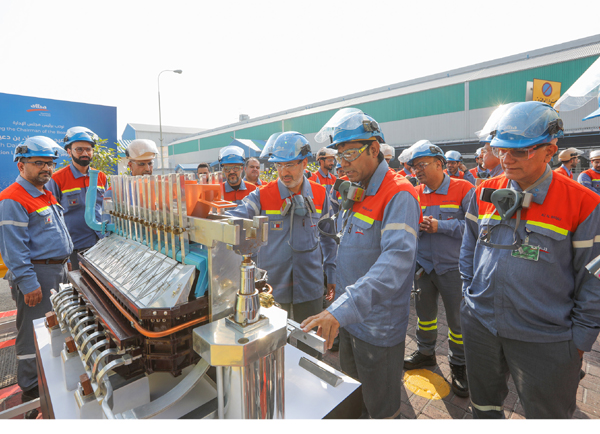 Aluminium Bahrain (Alba), one of the world's largest aluminium smelters, has begun commissioning of the Forced Cooling Network (FCN) Project at Potlines 4 and 5.
Managed in-house by the Operations and Engineering teams, the FCN Project has enabled Alba to creep-up the amperage to 410 kA in Potlines 4 and 5 which would ultimately lead to increasing Alba’s production capacity by approximately 17,000 metric tonnes per annum.
Announcing the successful commissioning of FCN Project, Alba’s Chairman of the Board of Directors Shaikh Daij bin Salman bin Daij Al Khalifa along with the Chief Executive Officer Ali Al Baqali, said it was mainly due to the exceptional teamwork of its employees.
The FCN Project commenced the detail engineering in August 2021 while the manufacture and installation began in March last year, said Shaikh Daij at a key ceremony held to celebrate the achievement.
Alba then successfully executed the project clocking an impressive 478,000 manhours worked on site without a Single Lost Time Injury, he stated.
Senior Alba executives, respective area directors and managers as well as concerned teams were also present during the commissioning of the FCN Project.
“By chasing operational efficiency, we will attain excellence as we journey to the future," remarked  Shaikh Daij.
"Devised as a focus area within Alba’s 5-year business strategy, the FCN Project started as one step outside our comfort zone since it was executed while Potlines 4 & 5 were fully operational -- and that speak volumes about the technical and operational expertise of our people,” he added.
Al Baqali expressed delight on commissioning of FCN Project simultaneously in Potlines 4 & 5 on time and within budget.
"Action expresses priorities and the key is to schedule our priorities right. I take the opportunity to thank our teams for this exceptional teamwork and for delivering this Project safely without any disruptions to our ongoing operations,” he added.-TradeArabia News Service
Share