The investments, which hit $292 billion in H1, are a step within the industrial strategy of Saudi Arabia to attract transformative industries with added value in a bid to increase the local content of these industries

Investments in Saudi Arabia’s Jubail and Yanbu cities that a Royal Commission has been mandated to oversee and develop, continue to move ahead for expansions and greenfield projects that are certain to further alter the kingdom’s industrial landscape and generate employment for its growing population of educated youth.

He explained that the Shareek program, announced by Saudi Crown Prince Mohammed bin Salman, aims to pump SR5 trillion until 2030, and include 24 companies.

Al-Salem added: “We are currently studying investments worth more than SR100 billion, which are expected to be realised during the next two years.”

The two coastal cities of Jubail and Yanbu are at the heart of Saudi Arabia's industrialisation programme. Jubail, on the Arabian Gulf and Yanbu, on the Red Sea have driven the industrialisation of the Kingdom since 1975, and continue to form a core part of the Kingdom's Vision 2030 strategy to diversify the economy and reduce reliance on hydrocarbons revenue.

The Royal Commission, which oversees the industrial cities of Jubail and Ras Al Khair on the Gulf, and Yanbu and Jazan City on the Red Sea, was set up in 1975 by King Khalid to diversify the Saudi economy by harnessing natural gas from oil extraction to create Saudi’s petrochemicals industry.

According to the Saudi Press Agency (SPA), the first agreement included an oligomer project, to establish and operate a factory to produce linear alpha olefins and poly alpha olefins and hydrocarbon derivatives with a value of SR3.75 billion and a total area of 180,019 sq m at the PlusChem zone at the Jubail Industrial City.

The second agreement included a nitrile project, to establish and operate a factory prod acrylonitrile, acetonitrile, hydrogen cyanide (HCN) and sodium cyanide (NaCN), at a value of SR3.75 billion, covering 334,200 sq m in the PlasChem area.

Jabeen member Eng Ahmad Al-Bliwi said that the total value of these investments exceeds SR7 billion and are a step within the industrial strategy of the Kingdom of Saudi Arabia to attract transformative industries with added value in a bid to increase the local content of these industries.

Meanwhile, Jubail and Ras Al Khair industrial cities are both contributing around SR90 billion ($24 billion) to Saudi Arabia’s GDP, according to the CEO of Ras Al Khair Ahmed Hassan. The amount accounts for 4.5 per cent of the non-oil GDP, Hassan said in an interview with Arab News.

Jubail, spread over 1,016 sq km about 100 km north of Dammam, is one of the world’s largest industrial cities.

Since its inception, Ras Al Khair has created 30,000 jobs and it's expected to add another 50,000 jobs over the next few years, with the completion of new projects including the King Salman Global Maritime Complex, which might start initial operations by the end of this year or early next.

Set up in 2009, Ras Al Khair industrial city has been built based on an economic plan, to target five main primary industries, namely aluminum, phosphate, zinc, copper, and steel.

The total size of investment in the industrial city amounts to SR150 billion, with the private sector having the lion share - a ratio of SR14 for every riyal invested by the government, or 1:14, Hassan said.

Speaking of green hydrogen, Hassan said that it is part of the city’s master plan which will be activated in action upon the announcement of the Kingdom’s national hydrogen strategy.

While latest figures are not available, the RCJY had till April 2021 attracted investment of about SR1.2 trillion ($319.9 billion) into the vast industrial cities. The Saudi Ministry of Industry and Mineral Resources said that every riyal the government spends on the Royal Commission for Jubail and Yanbu attracts eight from the private sector.

The RCJY has so far attracted investment of about SR1.2 trillion ($319.9 billion) into the vast industrial cities at the heart of the Kingdom's petrochemical power, Al Arabiya reported.

The investments were divided among four major cities — Jubail, Ras Al Khair, Yanbu, and Jazan — supporting a population of 430,000 among the population of the Royal Commission.

The number of the workforce in the cities reached 194,000 workers, while the total number of employees in the Royal Commission has reached 10,000.

The Saudi environment minister, Abdulrahman Al Fadhli, revealed that there are more than 23 investment opportunities in the fisheries sector

The Saudi Ministry of Environment, Water and Agriculture announced the launch of a fisheries incubator and accelerator. Over the coming period, the ministry aims to increase its exports of fisheries to 300,000 tonnes at SR12 billion.

In addition, it said it will sign an agreement with the Royal Commission for Jubail and Yanbu in Jazan City for Primary and Downstream Industries (JCPDI) to establish a 28-sq km Protein City for meat and fish, according to a recent statement.

The statement was made on the margin of the Saudi Agri-Business Forum (SABF) 2022 sessions held in parallel with the Saudi Agricultural 2022 at the Riyadh International Convention & Exhibition Center.

The Saudi environment minister, Abdulrahman Al Fadhli, revealed that there are more than 23 investment opportunities in the fisheries sector, adding that the kingdom’s production of fish during 2015 amounted to 3,000 tonnes, whilst exceeded 35,000 tonnes during the first half (H1) of this year.

In 2020, the Gulf nation's livestock sector contributed more than SR 17 billion to the gross domestic product (GDP). Since 2016, the kingdom’s imports of poultry shrank by 12 per cent.

Poultry production in Saudi Arabia has seen exponential growth at an annual rate of 10 per cent since 2014 and is targeted to reach 85 per cent by 2030. 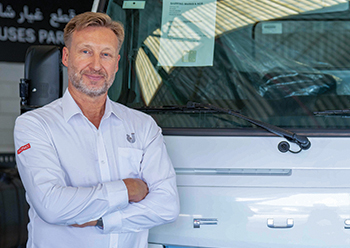